Evolution of Computers and Our Advancement

Today Computer has ventured into almost every perspective of modern day lifestyle. The sole objective of the computer was to compute large computations that couldn’t be easily done by humans. Computers were incepted not for entertainment or emails but to perform high level maths crunching calculations. But today technology has reinforced almost every aspect of our lives and brought up on a common platform to be dependent on computer.

Smartphones and PC are examples of modern-day computers. But during their inceptions, the picture was totally different. It has an interesting and long history. Broadly, the evolution of computers is grouped into generations.Let us deal with them one by one. 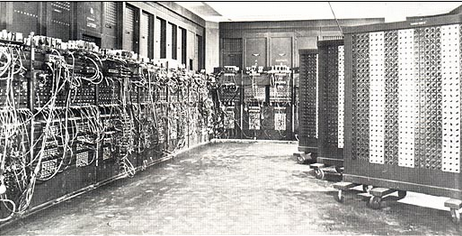 They were computers which were as big as room. They were developed very early in 1940-1950. Computers were powered by vacuum tubes and used magnetic drums to store data and memory. They didn’t resemble modern day computers in size or performance.

Current was controlled by vaccum tubes and other large bulky devices. The magnetic drum is a metal coated cylinder with magnetic iron-oxide material which stored data and programs.The First Generation Computers used only a very basic machine language in order to perform the calculations.!

Technicians took almost a day for maintaining and updating anything since vacuum tubes were used and maintaining them was a clumsy task.

There were many drawbacks of the First Generations Computers. It was the vacuum tubes that were mainly responsible for the large size of the machines and the massive amounts of heat that they released.They were very expensive to make and run, slow and had limited application capabilities. They also generated a lot of heat and used large amounts of electricity, the ENIAC used 160 kilowatts of electrical power! These computers produced so much heat that they regularly overheated despite large cooling units. First generation computers also used a very basic programming language that is referred to as machine language.

Following First Generation computers, in 1956 Second Generation Computers hit the technology. Due to immense development in Electronics vacuum tubes gets replaced by the transistor. The transistor had a major influence on the development of electronics as it was more reliable than the first generation. The computers got reduced in size and become much cheaper and accessible to a large number of people.

The first symbolic languages appeared and the backgrounds of high-level programming languages were developed. The first versions of this was COBOL and FORTRAN. The major drawback was that they were still generating a lot of heat which resulted in the damage to sensitive internal parts of the computer.

This is was relatively more accessible to the users. Punched cards and printouts were replaced by keyboards and monitors and the first operating system was created to allow multiple applications to run on one computer.

This generation can be said to resemble the modern day computers as the concept of the operating system was invoked for the first time.

The chip which contained the CPU is much advanced than invoking the concepts of GUI.Internet evolved as a result of development in Computer Networks. In the last generation keyboards and monitors were invented, in this generation we saw the invention of the mouse, GUI and other features. The usage of microprocessors expanded and in present day, the majority of electronic devices used microprocessors or micro-controllers.

With the development in nano technology, this is the future which is in the process of research and development. It will develop modern cutting edge technologies like artificial intelligence and robotics.

We cannot deny the fact that we have solely depended on computer technologies in every aspect of our life. We cannot imagine a single day without computers. The image of computers as a rectangular electronic device has now changed and computers have ventured into almost most of  the components of our day to day life.

In fact, increasingly computers are no longer objects at all, but they suffuse fabric and virtually every other material. Because of that, we really do need to care about what the future of computing holds because it is going to impact our lives all day long.

With the development of machine learning, artificial intelligence and IOT, computers are going to replace humans in every task soon.

Top 30 Best places to visit in Bangalore for Couples

TOP 25 BEST PLACES TO VISIT IN DELHI AT NIGHT

ABOUT US
whatbestinindia.com is your news, entertainment, music fashion website. We provide you with the latest breaking news and videos straight from the entertainment industry.
Contact us: [email protected]
FOLLOW US
© Newspaper WordPress Theme by TagDiv